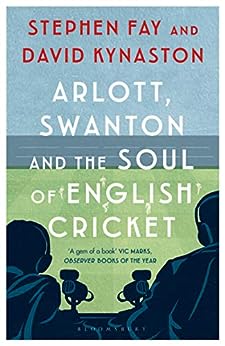 Those old enough will welcome a wonderful insight into the cricketing voices of their childhood. Arlott, Swanton and the Soul of English Cricket reflects upon two titans of cricket journalism and broadcasting. Youngsters can discover them for the first time. Stephen Fay and David Kynaston combine seamlessly to produce a gem of a book (Vic Marks Observer 'Books of the Year') Magnificent . One of the best cricket books I've read in years: it makes long-forgotten matches live and breathe as though they were played yesterday (Marcus Berkmann Daily Mail 'Books of the Year') A chronicle of 20th-century class difference, elegantly observed through the lives of the two men and their attitudes towards their beloved sport (Emma John Guardian 'Books of the Year') A wonderfully readable and illuminating account of the game in the last half of the 20th century . Beautifully written, meticulously researched and stuffed with rich sporting and social history, this must already be a candidate for Sports Book of the Year. Unputdownable (Michael Simkins Mail on Sunday) A triumph . [Kynaston and Fay] both have inside-outside sensitivities that keep this near-seamless collaboration shrewd, worldly, balanced and fresh (Times Literary Supplement) [A] delightful and thoughtful book . A nostalgic delight (Standpoint) John Arlott and EW Swanton defined cricket commentary in the second half of the 20th century . As this wonderful biography shows, they were united by their love of the spirit of cricket, and stood together in resisting anything that compromised it, from bullying moguls to racism (Daily Telegraph) An important account of English cricket through the post-war decades from the glorious summer of 1947 to one-day cricket and Packer . Cricket has always produced literature that weaves together sport and society and this book certainly presents an insight into post-war England that reaches far beyond the boundary rope (Country Life) A historian of peerless sensitivity and curiosity about the lives of individuals (Praise for David Kynaston Financial Times) John Arlott and EW Swanton were the voices of English cricket for much of the post-war years. This insightful, provocative book gently teases out the differences in their styles, backgrounds and personalities and shows why all this mattered in a society defined by class and in a sport riven by it (Hugh MacDonald Herald) --Este texto se refiere a la edición paperback.. Stephen Fay has written extensively on finance, the theatre and cricket. His books include Tom Graveney at Lord's, and he is a former editor of Wisden Cricket Monthly.David Kynaston has written twenty books, including Austerity Britain, Family Britain and Modernity Britain. His most recent cricket book is WG's Birthday Party, an account of the historic 1898 Gentlemen v Players match at Lord's. --Este texto se refiere a la edición paperback.. WINNER OF THE TELEGRAPH CRICKET BOOK OF THE YEAR AWARD 2019 'Beautifully written, meticulously researched and stuffed with rich sporting and social history ... Unputdownable' Mail on Sunday After the Second World War, as the BBC tightened its grip on the national consciousness, two of the most famous English voices were commentators on games of cricket. John Arlott and E.W. ('Jim') Swanton transformed the broadcasting of the nation's summer game into a national institution. Arlott and Swanton typified the contrasting aspects of post-war Britain. Because of their strong personalities and distinctive voices – Swanton's crisp and upper-class, Arlott's with its Hampshire burr – each had a loyal following. As England moved from a class-based to a more egalitarian society, nothing stayed the same – including professional cricket. Wise, lively and filled with rich social and sporting history, Arlott, Swanton and the Soul of English Cricket shows how, as the game entered a new era, these two very different men battled to save the soul of the game.

Summer voices heard again Once upon a time there was a game which was so ingenious, subtle and skilful that people flocked to watch it. If they couldn’t get to the game they listened to the commentary or summary by two brilliant observers. Times change, attention spans decline and spectators demand constant sensation and drama. This excellent book takes those of us who recall those wonderful days back to when Test Matches were fewer and the better for it because their scarcity increased the anticipation and excitement. I’m glad Arlott and Swanson have been spared witnessing the decline of the greatest game. Sledging, cheating, yelling and clap-handing’ and that’s just the players. A modern Test Match crowd is a bear-pit. But with this book we return to the game at its best and get a fascinating insight into what made those two fine men tick. Their foibles, frailties and fascination. Great stuff, indeed. .

Cricket and its corridors of uncertainty This is essentially the history of post-war cricket seen through the eyes of two men whose voices and writings shaped and enhanced the sporting experience for millions. They were of different backgrounds, styles and philosophies, but both had a significant impact on the game. There was certainly plenty to chew over: the amateur/professional wrangle, the emergence of the one-day game, the d'Oliveira affair and the Kerry Packer revolution to name but a few. All these controversial milestones are examined in fascinating detail. It was especially pleasing to be reminded of some of Arlott's famous word pictures for Test Match Special: 'A stroke of a man knocking a thistle-top off with a walking stick.' I suppose this book will appeal largely to those described in the Postscript as ' ... older followers of the game [who] pine for a lost golden age.' That would be a pity because it would be an education to younger cricket followers to know that there's nothing new about counties' financial struggles, slow over-rates, boorish behaviour and the fear that the shorter game will eventually devour its long-standing bedfellow. As far back as 1972, Arlott was reflecting that 'it would be a pity if the entertaining and rewarding tail [one-day cricket] were to wag the dog so hard as to shake it off.' This is an absorbing study, well written and admirably researched.

Read this wonderful book during the baking hot month of May and ... Read this wonderful book during the baking hot month of May and few have had a grater time warping quality than this This elegy to two great broadcasters and the game of cricket which we have sadly list evokes pure nostalgia of summers past Both Arlott and Swanton were supporters of the 3 County and Test Games but were pragmatic enough to appreciate the importance of the importance of the one day game Quite what they had made of T20 and the number of games expected from players goodness only knows Today crickets administrators do not seem to realise that more is less in broadcasting terms none of the ex players or pundits who populate the the commentary box can hold a candle to either Arlott and Swanton I have always been an Arlott fan who along with Alistair Cook painted the pictures on radio better than anyone eise i have ever heard Try and find this summer an of the cuff description to that of Arlott describing Asif Massoods run up as "like Groucho Marx chasing a pretty waitress" Read and savour this history of the reporting of post war cricket by two broadcasters and writers of whom we shall not see their lie again and on a game that sadly is a shadow of summers past Fay and Kynaston have done them proud. Buy it and enjoy

Arlott, Swanton and the Soul of English Cricket

Arlott, Swanton and the Soul of English Cricket