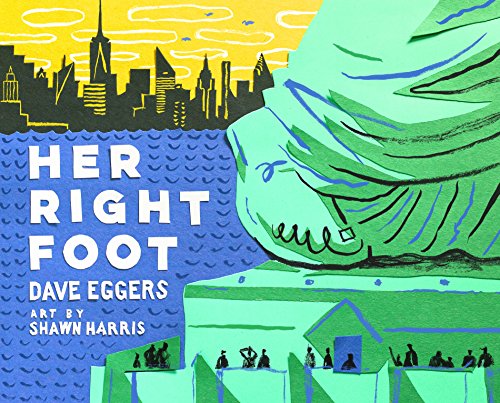 Dave Eggers is the author of many books, including This Bridge Will Not Be Gray, The Circle, and A Hologram for the King. He is the cofounder of: Voice of Witness, an oral-history series focused on human-rights crises; 826 National, a network of writing and tutoring centers; and ScholarMatch, which connects donors and under-resourced students to make college possible. Shawn Harris is an artist and musician who lives and works in Morongo Valley, California. This is his first book. --Este texto se refiere a la edición hardcover.. "combined with Shawn Harris's spectacular artwork, reminiscent of 1950s fashion illustrations, it is - like Liberty herself - oddly moving." The Times Saturday Review --Este texto se refiere a la edición hardcover.. If you had to name a statue, any statue, odds are good you'd mention the Statue of Liberty. Have you seen her?She's in New York. She's holding a torch. And she's taking one step forward. But why?In this fascinating, fun take on nonfiction, uniquely American in its frank tone and honest look at the literal foundation of our country, Dave Eggers and Shawn Harris investigate a seemingly small trait of America's most emblematic statue. What they find is about more than history, more than art. What they find in the Statue of Liberty's right foot is the powerful message of acceptance that is essential to an entire country's creation. Can you believe that? Plus, this is the fixed format version, which looks almost identical to the print edition.

Best kids book we own! This is our kids favorite book (4 and 7) and an incredibly important narrative, especially for this particular time. It is a smart and proactive lesson in American history that both kids and adults can sink Into. I am so thrilled to have discovered it. Thank you Dave Eggers, and to every single person who had anything to do with making this book possible. You have done good!! More like this, please!!

Great for all ages!!! This book should be on everyone’s shelf! It’s a beautiful story that folds together history, patriotism, immigration, and our common humanity! I have always had an affinity for Lady Liberty, but in my studies and personal observations, I have never considered the symbolism of her right foot. I am moved and empowered by this book and have loved sharing it with my own children, teachers, students, and have given it as a gift multiple times. The art is beautiful, the writing engages both adults and children, and the message is timely and deserves to be amplified!

History,Humor,Hope for the future Clever ,well written history of little known facts about the Statue of Liberty Should be required reading in all classrooms from 3rd grade on .!Enough material and information for people of all ages to think about and discuss .Topics could range from why Brown statue changed to green to the reasons and hazards immigrants faced when they decided to come to America An excellent text enhanced with clever illustrations to attract young and old . Very impressive😊

Good book. Loved! This is a good, solid, and long hard cover book. I homeschool and decided to add this to our curriculum for my first grader who was studying the statue of liberty. Maturity wise, he was probably a little young to full grasp the entire idea behind the story but he found the facts interesting and it helped to open up a discussion about how we all came here, the poem by Emma Lazarus, and how America started. I was hesitant about political agenda being pushed through the book, but overall, I was pleased with what we saw. I included pictures of the three of the most "political" pages within the book for reference.

Makes me proud to be American! This is the best children’s book I have purchased in a long time. It’s a little long and very informative, but written in such fun, easy going prose that my young kids (5 & 8) don’t get bored by it at all. I even learned a few things and I used to live in NYC! And the art is just fantastic! I am picky about kids books I buy instead of borrow from the library, and I think this is a must-own. Before reading it, I was a little concerned it would be “political” and even as a moderate conservative I didn’t find it to be so (although others may disagree) and furthermore, politics shouldn’t play a role in the symbolism of the Statue of Liberty and the main principle our nation was founded on — FREEDOM! The lesson of the book is that freedom is a principle of action, which I love. Lady Liberty is so anxious to help others be free that she has to meet them at the sea to welcome them! I was emotional by the end reading it to my kids and just felt so proud to be an American! I’d love for this duo to write and illustrate more informative books for kids because this one is excellent.

Creative book I enjoyed this book that included some factual information about the Statue of Liberty. I'm not certain that it is completely nonfiction though. Some seems hopeful and altruistic, but not necessarily factual. Using this book with my 4th graders as we talk about national landmarks and their symbolism.

Teach Our Children To Care Love this book! It is entertaining and factual, and I am sure my 11 yr old grandson will like it. But I almost want to keep it for myself! Just returned from NYC... the sentiment behind the Statue Of Liberty has always been in my heart. It is crucial that her story stays strong, that her stride continues.

My Heart in Kenya (English Edition)