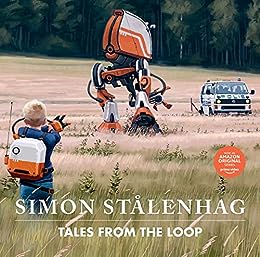 "If you've got a geek in your family who needs a Christmas present, this should be it. They'll love you forever. If you've got a young nerd in need of corruption -- a kid who'd benefit from having their reality shaken and their head filled with impossible things -- this'll do the trick because, Tales has the magic. It's got the robots, the weirdness, the dinosaurs." - NPR.ORG "Simon Stålenhag did not forget the robots. More to the point, Simon Stålenhag can't forget the robots, because in his remarkable, beautiful new art book, Tales From The Loop, he has embedded them into our collective past, offering a vision of an alt-history Sweden in the late 80's and early 90's where they clack through suburban streets, lurk in the backyard trees, or lie, still and cold, abandoned in snowy fields." --Jason Sheenan, npr.org Tales from the Loop is Sci-Fi Art Excellence: "Stålenhag was far and away my favorite sci-fi artist of 2015, and Tales From the Loop will show you why. His universe is a dystopia you wouldn't mind exploring, one that oppresses you with mystery and beauty rather than drab soldiers or vacuous "you have this emotion, therefore you belong in this group" regimes. The Loop is sophisticated sci-fi buried under snowy Swedish dirt. And I can't wait to dig deeper." --Kyle Hill, Nerdist Tales From The Loop Is A Stunning Book Of Alternate Nostalgia: "We're enormous fans of Simon Stålenhag's artwork around here, ever since we first came across him in 2013. His work mixes high-tech futurism with scenes from every day Sweden. Now, he's released a brilliant art book..." --Andrew Liptak, io9.com --Este texto se refiere a la edición hardcover.. Swedish artist Simon Stålenhag burst onto the art scene in 2013 when his first series of paintings were shared on the Internet, and has since become something of a phenomena in the art and sci-fi communities. His original blend of naturalistic landscape paintings with science-fiction elements and a very low-key recollection of growing up in the '80s struck a chord, not just in Sweden, but all over the world. The Verge, Wired, IO9, Scientific American, and The Guardian have all praised his work. But until late 2014, the only place you could watch his art was in digital form on the Internet. Stålenhag splits his time between a small cabin at Mälaröarna (the setting that inspires his work) and an apartment in Stockholm. --Este texto se refiere a la edición hardcover.. The basis for the new Amazon Prime Original Series! Perfect for fans of E.T. and Stranger Things—the first narrative artbook from acclaimed author and artist Simon Stålenhag about a fictionalized suburban town in the 1980s inhabited by fantastic machines and strange, imaginative beasts.In 1954, the Swedish government ordered the construction of the world’s largest particle accelerator. The facility was complete in 1969, located deep below the pastoral countryside of Mälaröarna. The local population called this marvel of technology The Loop. These are its strange tales. From the same author who wrote the imaginative artbook The Electric State, this “haunting,” (The Verge) “sophisticated sci-fi” (The Nerdist) follows the bizarre stories from otherworldly creatures and is a page-turner you won’t be able to put down.