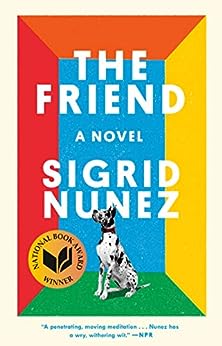 Very moving I found this book both moving and thought-provoking, with insightful observations on writing, grief and our relationships with animals. I am a mental health first aider and read this shortly after attending suicide prevention training. The book reinforced many of the points that were made by our trainers. I liked the fact that Nunez doesn't make the deceased into a saint. He actually comes across as quite an unlikeable character, without in any way diminishing the sadness of his loss or the validity of the narrator's grief.

Delightful true story. A charming book that pulls no punches about the difficulties of dog ownership, especially large dog ownership, in a small apartment in the city.

Heartwarming This book really tugs on your heart strings. Loved every minute of reading.

Best thing I’ve read for years Everything I want from a book: beautifully written, thought-provoking, compelling and intelligent. I wanted to read bits aloud from every page and will read it again with pleasure. One for the special books shelf.

Friendship What is a friend and how we grieve? A lovely story about both but not maudlin.

Read it! A beautiful book on friendship, writing and so much more.

fascinating book Really enjoyed reading this after Jenny Offil's 'Department of speculation' Really interesting ideas and a good look at love. Written beautifully and in a way where the reader never drifts.