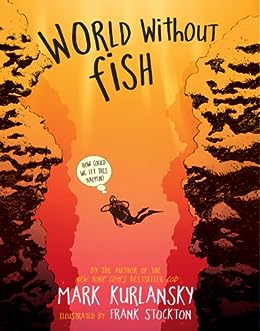 Mark Kurlansky is a former commercial fisherman and New York Times bestselling author of Cod, Salt, The Big Oyster, and other books. He's won numerous awards, including the James A. Beard Award, ALA Notable Book Award, and New York Public Library Best Books of the Year Award. He lives with his wife and daughter in New York City and Gloucester, Massachusetts. His website is www.markkurlansky.com. Frank Stockton is an artist and illustrator whose work has appeared in Esquire, The New Yorker, The New York Times, and Rolling Stone. He lives in Brooklyn, New York. --Este texto se refiere a la edición paperback.. "In his histories of cod and oysters, Mark Kurlansky described how those species once thrived in the wild, and how they were depleted. [World Without Fish] casts an even wider net and, with the help of superb illustrations and an interwoven graphic novel by Frank Stockton, creates a compelling narrative for young people." --The New York Times-- "The New York Times" --Este texto se refiere a la edición paperback.. A KID’S GUIDE TO THE OCEAN "Can you imagine a world without fish? It's not as crazy as it sounds. But if we keep doing things the way we've been doing things, fish could become extinct within fifty years. So let's change the way we do things!"World Without Fish is the uniquely illustrated narrative nonfiction account—for kids—of what is happening to the world’s oceans and what they can do about it. Written by Mark Kurlansky, author of Cod, Salt, The Big Oyster, and many other books, World Without Fish has been praised as “urgent” (Publishers Weekly) and “a wonderfully fast-paced and engaging primer on the key questions surrounding fish and the sea” (Paul Greenberg, author of Four Fish). It has also been included in the New York State Expeditionary Learning English Language Arts Curriculum. Written by a master storyteller, World Without Fish connects all the dots—biology, economics, evolution, politics, climate, history, culture, food, and nutrition—in a way that kids can really understand. It describes how the fish we most commonly eat, including tuna, salmon, cod, swordfish—even anchovies— could disappear within fifty years, and the domino effect it would have: the oceans teeming with jellyfish and turning pinkish orange from algal blooms, the seabirds disappearing, then reptiles, then mammals. It describes the back-and-forth dynamic of fishermen, who are the original environmentalists, and scientists, who not that long ago considered fish an endless resource. It explains why fish farming is not the answer—and why sustainable fishing is, and how to help return the oceans to their natural ecological balance. Interwoven with the book is a twelve-page graphic novel. Each beautifully illustrated chapter opener links to the next to form a larger fictional story that perfectly complements the text.

The frightening truth This book should be made compulsory reading and especially for politicians and teachers everywhere. Brilliantly clear message and engaging for anyone with the skill to read.

Strong Science Book for Middle School This fascinating middle grade science book details the critical role fish play in ecosystems and what would happen if they disappeared. I appreciate how well written this book is, and the balanced perspective it takes. Recommended for grade 5+.

Perfect What a great book!