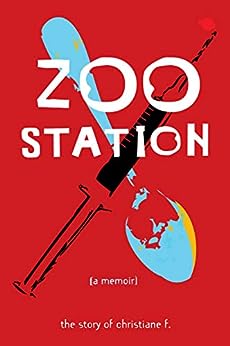 "An eloquent memoir of teen drug abuse from 1970s Berlin retains a contemporary feel in a new translation. Christiane F.'s story begins in childhood. Readers feel, from her 6-year-old perspective, the sense of frustration and restlessness that permeates the housing projects of Gropiusstadt and her father's violent punishments for mild infractions. At 12, she first tries alcohol, hashish and LSD, and the experiences are described with evocative imagery. That Christiane will ultimately become addicted to heroin is apparent from the first page, and a sense of tragic inevitability pervades each early anecdote. Christiane paints a grim portrait of the drugs-and-sex-work scene around Berlin's Zoo Station, but readers will also see the sense of fraught community that develops among Christiane and her friends. The strong pull of heroin is never clearer than when, after four days of brutal withdrawal, Christiane talks herself into having 'one last and final fix.' Short chapters written by Christiane's mother and a social worker, a photo spread, a foreword and editorial footnotes help contextualize Christiane's life in West Berlin. Readers might, however, wish for more information about how the memoir came to be published, and a note about HIV infection (not a possibility in Christiane's time, but certainly a risk now) would also be helpful. Disturbing but compelling."--Kirkus Reviews--Journal "A powerful memoir first published 35 years ago in Germany (a U.S. edition and film adaptation soon followed) shows no sign of tarnish in Cartwright's mesmerizing and urgent new translation. The story of Christiane F., a heroin-addicted teenager living in 1970s Berlin, begins with her family's move from the country to a fractured and confusing existence in the Berlin projects. Christiane's bleak circumstances (her father is physically abusive, her mother permissive and absent, her teachers cold and uncaring) lead the 12-year-old to experiment with drugs. She begins with pot and alcohol--rapidly moving on to pills, acid, and finally heroin--finding excitement and intense companionship with a group of David Bowie-worshipping teenagers who populate the city's underground club scene. Eventually, Christiane resorts to working alongside her boyfriend as a prostitute at the Bahnhof Zoo train station to support her addiction. "Chapters written from the perspective of Christiane's mother and other adult figures can sometimes disrupt the hypnotic effect of Christiane's narrative, but they also offer broader insight into a vulnerable population under the influence of a devastating new drug. Christiane's uninhibited voice crackles with cynicism over the hypocrisy and arbitrary rules she observes around her ('I hated it when people talked like they also wanted to save me. I got real marriage proposals. And all the while they knew full well that they were only taking advantage of our misery, the misery of the addicts, to satisfy their own desires'), as she documents the choices that bring her further into destitution and despair. Even in moments of utter depravity, Christiane remains sympathetic and wise, with a deeply embedded sense of morality. Although Christiane's message to readers is, without a doubt, 'Do not follow me, ' she synthesizes moments of beauty and joy alongside those of horror, resulting in a deeply observant look at the search for love and meaning amid chaos."--Publishers Weekly--Journal --Este texto se refiere a la edición kindle_edition .. Christiane F. is a former heroine addict famous for her contribution in this autobiographical book, and the film based on the book. --Este texto se refiere a la edición kindle_edition .. This incredible autobiography of Christiane F. provides a vivid portrait of teen friendship, drug abuse, and alienation in and around Berlin's notorious Zoo Station. Christiane's rapid descent into heroin abuse and prostitution is shocking, but the boredom, longing for acceptance, thrilling risks, and even her musical obsessions are familiar to everyone. Previously published in Germany and the US to critical acclaim, Zest's new translation includes original photographs of Christiane and her friends.

Recommend to any 1970s curio hunters! This bio of a reformed druggie is iconic - set in 1970's Germany and carries all the hallmarks of that era, against a Grange Hilly backdrop. I would recommend to any seekers of 1970's curios anywhere.

Five Stars Enjoyed this book in the 80's. A very honest insight to herion addiction